You are here: Home / Museum / A Historic Zoom Call 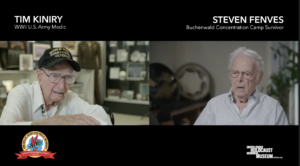 MILLVILLE, NJ: On August 31, the Millville Army Air Field Museum (MAAFM) will host a rare and historic meeting between a 91-year-old Buchenwald concentration camp survivor and a 100-year-old WWII U.S. Army medic who treated prisoners at Buchenwald when the camp was liberated by US Army forces.

The MAAFM has collaborated with the United States Holocaust Memorial Museum in Washington, DC, to arrange a virtual get-together between Steven Fenves, a Holocaust survivor who was at Buchenwald, and MAAFM member and volunteer Tim Kiniry, 77 years after they may have been at the camp at the same time.

Kiniry and Fenves will meet for a conversation, via Zoom, at 12:30pm in the MAAFM’s main conference room, located in the historic WWII base headquarters, 1 Leddon Street, at Millville Executive Airport, Millville, New Jersey. A reception will follow at 1:30pm with guests welcome to join.

Buchenwald was a Nazi concentration camp located near Weimar, Germany. It was one of the largest concentration camps in Germany and included more than 130 subcamps. The Nazis imprisoned a variety of people in Buchenwald; among them were political opponents, Jews, and prisoners from Nazi-occupied Europe. The camp inmates had to perform forced labor, working primarily in local armament factories. Insufficient food and poor conditions, as well as deliberate executions, led to more than 56,000 deaths of the 250,000 prisoners who passed through the Buchenwald camp system.

Fenves was deported, along with his family, to the Auschwitz-Birkenau killing center in 1944.  At the age of 13, he joined the camp resistance, served as an interpreter for Polish political prisoners and was smuggled onto a transport to a Buchenwald subcamp, where he spent six months as a forced laborer working on the assembly line in a Junkers aircraft factory. He was sent on a death march to the main camp and liberated from Buchenwald by American soldiers on April 11, 1945.

Kiniry served in the U.S. Army from 1942 to 1945 with the 45th Evacuation Hospital attached to the First Army and then later the Third Army at the end of the war. He was a medic at the Battle of the Bulge and at other European Theatre battles where his group treated thousands of soldiers in field hospitals located just behind battle lines. His unit set up operations inside the Buchenwald concentration camp for two weeks after it was liberated, treating gravely ill prisoners and saving numerous lives. Kiniry has, in previous interviews with Millville High School students at the museum, described the horrific conditions in the camp and praised the valiant efforts that were made at that time.

“Tim Kiniry recently said that he wished he had the opportunity to meet a Buchenwald survivor once again,” explains Bob Trivellini, MAAFM vice president. “With that incentive, we reached out to the United States Holocaust Memorial Museum in search of a Holocaust survivor who was imprisoned at Buchenwald and that Tim might even have treated during those first weeks of the liberation in April 1945.”

Diane Saltzman, Director of Constituency Engagement at the U.S. Holocaust Memorial Museum, which is America’s national memorial to the Holocaust, helped make this opportunity become a reality. She says, “These two gentlemen have shared their stories with countless audiences, testifying to the truth of what they experienced and witnessed. It’s an honor to help bring them together.”

“This is a once-in-a-lifetime opportunity,” notes Trivellini. “As a museum preserving WWII history, the MAAFM is thrilled to make this meeting happen. We know that these two men will offer details about the liberation of Buchenwald and the treatment of prisoners that are unique and possibly undocumented.”