”Four pieces of equipment (that were) vital to our success in Africa and Europe were the bulldozer, the jeep, the 2-ton truck, and the C-47 airplane. Curiously, none of these is designed for combat.” 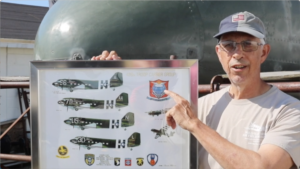 Click the above image to view the C-47 Restoration Video

One of the most prolific aircraft designs of the 20th Century the Douglas C-47 was a direct variant of the (civilian) Douglas DC-3 airliner. The first C-47 flew on 23 December 1941, a mere sixteen days after the Japanese attack on Pearl Harbor. The C-47 underwent several modifications over the civilian DC-3 including a strengthened floor, larger cargo door, hoist, and Astrodome behind the cockpit for celestial navigation. A total of 10,174 C-47’s were produced and saw service with all Allied nations throughout WWII. The quote by General Eisenhower validates the role of the C-47 as a pivotal piece of the Allied invasion of mainland Europe and one of the most iconic military transports in history.

THE CREW: The C-47 had a crew of four personnel: Pilot, Co-Pilot, Crew Chief, Radio Operator. Space was very tight in the cockpit and combined crew weight was not to exceed 600 lbs! Weight was always a prime consideration during flight operations. The average age of military personnel during WWII was 26 and flight crews were no different. Pilots and Co-Pilots were typically commissioned officers and the Crew Chief and Radio Operator were enlisted. To be considered for pilot training you had to have a high school diploma and between the ages of 18 – 26 years.

THE MISSION: The C-47 was named the “Skytrain” by US forces and it’s easy to understand why. Trains, as we know, are designed to transport people and cargo. The C-47 also carried people and cargo. The difference is how people and cargo were delivered. C-47’s were the primary transport for all Airborne operations in WWII. The C-47 carried up to 18 paratroopers and up to 6,000 pounds of cargo. The C-47 was also instrumental in pioneering the air evacuation of casualties throughout the war. The plane could be equipped with 24 stretchers with three attendants (medical personnel). C-47’s also towed gliders carrying personnel and equipment. The final and largest airborne operation of WWII was Operation Varsity begun on 24 March, 1945. More than 2,000 Allied aircraft and 1,300 towed gliders carried 17,000 troops to be dropped via parachute and glider over the banks of the Rhine River. The war in Europe ended less than two months later.

THE RISK: C-47’s were unarmed and unarmored. Their missions required that they repeatedly fly over enemy territory and be subjected to small arms fire, flak and anti-aircraft fire. Paratroopers and cargo were often dropped at an altitude as low as 300 feet. The C-47 cruising speed at 160 mph also made them risky targets from ground fire. A very tragic “friendly fire” incident occurred during the Airborne invasion of Sicily in July, 1943. 23 C-47’s were destroyed and 37 heavily damaged by Allied forces in a very tragic friendly fire incident on 11 July, 1943. 88 Americans were killed, 162 wounded and 69 missing in action. The planes were mistaken for enemy aircraft. To prevent this from happening again, “invasion stripes” were painted on most Allied aircraft for the D-Day invasion the following year. Three white stripes alternated with two black stripes were painted on the bottom and top of each wing and the rear fuselage. A simple, but effective deterrence to future friendly fire accidents. 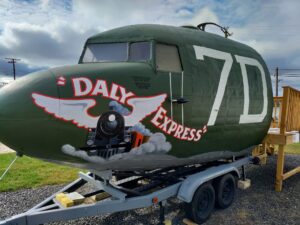 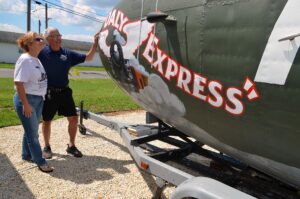 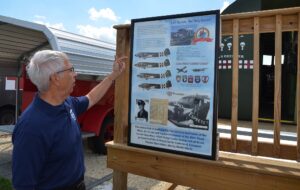 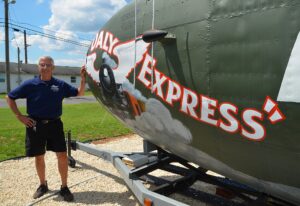 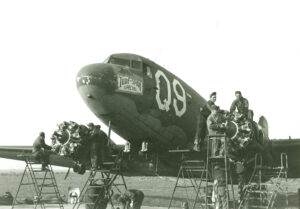 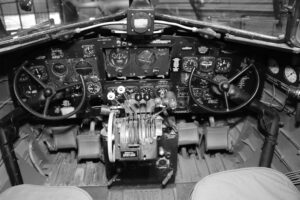