You are here: Home / Museum / Murals

Millville’s Wall of Remembrance was dedicated during a public ceremony on Saturday, April 25, 1998. During the dedication ceremony, a vintage P-47 Thunderbolt flew tribute overhead in honor of those who served and gave the ultimate sacrifice for their country.

The mural was the vision of George M. Curio, WWII Veteran B-24 Gunner and Community Leader. George left us not long ago, but his vision will live on to inspire future generations to come.

This original design illustrates two versions of the Republic P-47 “Thunderbolt”” fighter plane used at the Millville Army Air Field. The aircraft fly majestically before the image of a combat garbed WWII fighter pilot. The pilot represents Millville’s 14 fallen pilots pilots and all WWII pilots who gallantly served this country to preserve the freedom we enjoy today.

Samuel M. Donovan of Woodstown, NJ, is the muralist, designer and painter who captured the essence of Millville’s contributions to America’s aviation history on a number of structures in Millville’s historic district, in addition to the three story north wall of City Hall at the Millville Municipal Complex at High and Main Streets in Millville.

Mr. Donovan created a WWII mural that depicts the Link Trainer, the only flight simulator used from the 1920’s through the early 1950’s to teach pilots how to fly under poor conditions. The mural is painted on the original WWII Link Trainer Building and contains a fully operational Link Trainer, one of only a few left in the world. “We are honored to unveil this new mural located in the museum’s historic complex at the corner of Peterson and Leddon Streets at Millville Executive Airport,” announced Chuck Wyble, MAAFM president. “It highlights a very important historic artifact displayed in an equally historic building, where 1,500 pilots received integral flight training during WWII. We are proud to underscore its historic importance to visitors.”

This is the fifth mural created by Donovan that highlights the important WWII history at the Millville Army Air Field. The first, Millville’s WWII ‘Wall of Remembrance,’ was created and dedicated in 1998 and continues to be displayed on the north face of Millville’s City Hall building located at High and Main Streets. It was the vision of WWII veteran B-24 gunner and community leader George M. Curio and sponsored by the MAAFM. 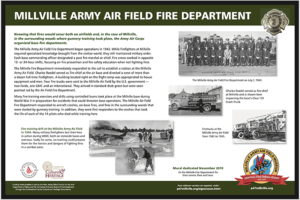 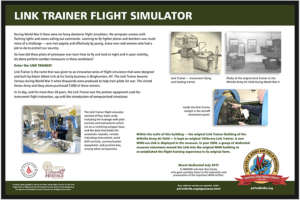 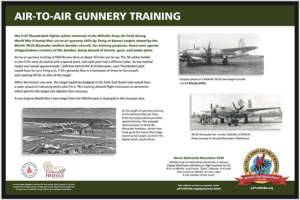