You are here: Home / Exhibits / The Navajo Code Talkers 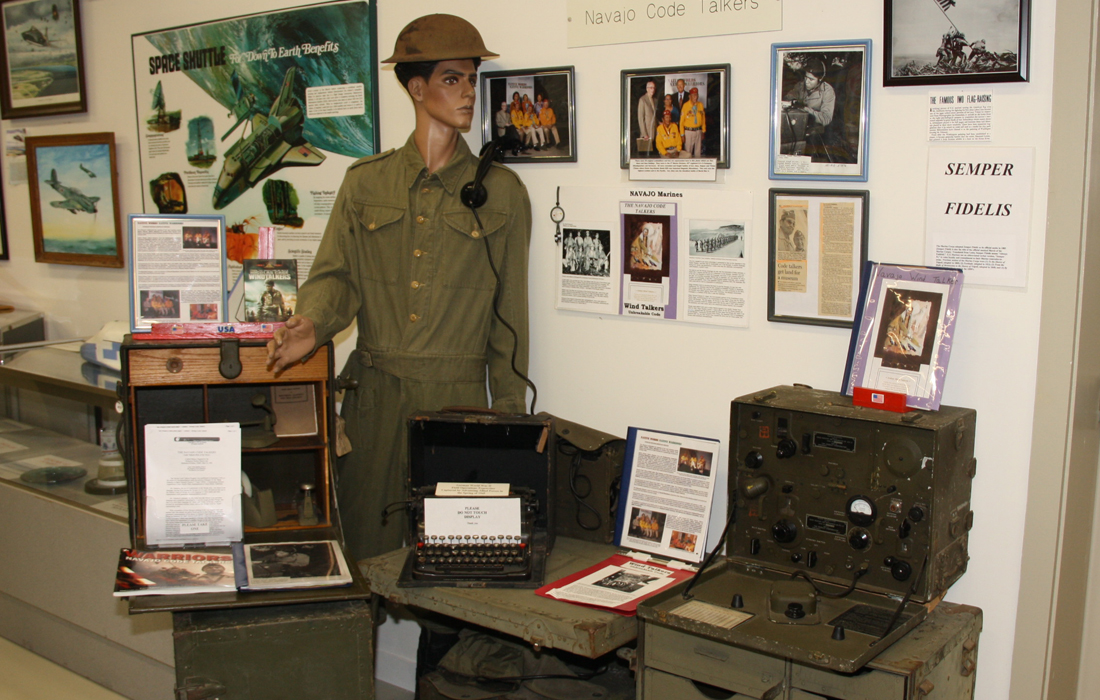 Mr. Johnston, the son of a missionary to the Navajo tribe, was fluent in the language, having lived among the Navajos for 24 years. He believed that use by the Marine Corps of Navajo as a code language in voice (radio and wire) transmission could guarantee communications security.

Mr. Johnston’s rationale for this belief was that Navajo is an unwritten language and completely unintelligible to anyone except another Navajo, and that it is a rich fluent language for which code words, in Navajo, could be devised for specialized military terms, such as the Navajo word for “turtle” representing a tank.

With cooperation of four Navajos residing in the Los Angeles area, and another who was already on active Naval service in San Diego, Mr. Johnston presented a demonstration of his theory to General Vogel and his staff at Camp Elliott on February 25, 1942. Marine staff officers composed simulated field combat messages, which were handed to a Navajo, who then translated it into tribal dialect and transmitted it to another Navajo on the other side of the line. The second Indian then translated back in perfect English in the same form which had been provided originally. The demonstration proved entirely successful and as a result, General Vogel recommended the recruitment into the Marine Corps of at least 200 Navajos for the code talker program. As a footnote, tests in the Pacific under combat conditions proved that classified messages could be translated into Navajo, transmitted, received and translated back into English quicker than messages which were encoded, transmitted and decoded employing conventional cryptographic facilities and techniques.

With the Commandant’s approval, recruitment began in May 1942. Each Navajo underwent basic boot camp training at San Diego, the Marine Corps Recruit Depot before assignment to the Field Signal Battalion for training at Camp Pendleton. It should be noted that at the outset, the entire Navajo code talker project was highly classified and there is no indication that any message traffic in Navajo language — while undoubtedly intercepted — was ever deciphered.

Initially, the course at Camp Pendleton consisted of training in basic communications procedures and equipment. At the same time 29 Navajos comprising the first group recruited devised Navajo words for military terms which were not part of their language. Alternate terms were provided in the code for letters frequently repeated in the English language. To compound the difficulty of the program, all code talkers had to memorize both the primary and alternate code terms, for while much of the basic material was printed for use in training, the utmost observance of security precautions curtailed the use of printed material in a combat situation.

Once the code talkers completed training in the States, they were sent to the Pacific for assignment to the Marine combat divisions. In May 1943, in response to a request for a report on the subject, the various division commanders reported to the Commandant that excellent results had been achieved to date in the the employment of Navajo code talkers in training and combat situations, and they had performed in a highly commendable fashion. This high degree of praise concerning the Navajos’ performance prevailed throughout the war and from commanders at all levels.

Although recruitment of the Navajos was comparatively slow at the time the program was first established, Marine recruiting teams were sent to the Navajo territory and a central recruiting office was set up at Fort Wingate. By August 1943 a total of 191 Navajos had joined the Marine Corps for this specific program. Estimates have placed the total number of Navajos in the code talker program variously between 375 and 420 individuals. It is known that many more Navajos volunteered to become code talkers than could be accepted; however, an undetermined number of other Navajos served as Marines, in the war, but not as code talkers.

In recognition of their dedicated service to America during World War II, the Navajo code talkers were awarded a Certificate of Appreciation from the President of the United States in December 1981. Their unique achievements constitute a proud chapter in the history of the United States Marine Corps. Their patriotism, resourcefulness, and courage also have earned them the gratitude of all Americans.

Source: From the handout given at the program at Fort Huachuca. Provided by Cris Kimball. “The Navajo Code Talkers: Part of the Story”. A Brief History Prepared by the Reference Section History and Museums Division, USMC, May 14, 1982